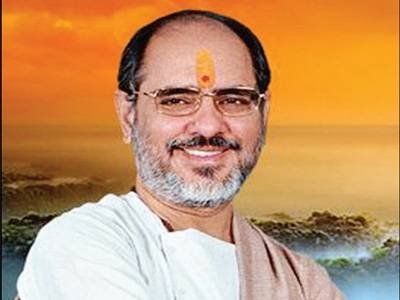 Ramesh Oza was born on 31 August 1957 at Devka village near Porbandar, Saurashtra, Gujarat, India. He was born in Audichya Brahmin family of Vrajlal Kanjibhai Oza and Laxmiben Oza. He completed his initial education at Tatvajyoti, a Sanskrit school at Rajula. Eventually, he moved to Mumbai, where he completed his primary education and completed graduation in commerce. He was inspired by his uncle, Jeevaraj Oza who was narrator of the Bhagavata Purana. His uncle noticed his interest that led him to study and practice religious scriptures.

He held his first discourse on the Bhagavata Purana at the age of 13 in Gangotri. At the age of 18, he held Bhagavata Puranarecitation in central Mumbai. He has conducted numerous recitations across the world since then. He founded religious and educational institutes namely Devka Vidyapith and Sandipani Vidyaniketan near Sandhavav village and Porbandar Aerodrome. Hindu Smitoday, in recognition of his social and spiritual contributions, awarded him Hindu of the Year in 2006.