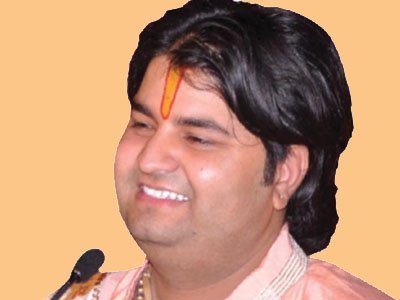 By the grace of Sadguru, Thakurji rendered his first maiden Bhagwat Katha at the tender age of 12 In Phalen village in Braj Mandal., Shri Rajvanshi a noted intellectual scholar of Vrindavan was so deeply and strongly strut by the unusual eloquence, knowledge and style of presentation katha gave him the name of KRISHNA and later Padam Vibhushan Swamai Shri Kalyan Dev of Shukartale gave him the title of SHUKDEV.

Shri Sanjeev Krishan Thakur is not only one of the few Kathakars on the firmament, he is an outstanding and distinguished personality committed to serve humanity. Today, religious conversion not only in east-western India but all over the country is a serious and worries, some challenge. Whenever, he gets time, Sanjeev Krishana Thakurji meets tribal boys and girls in forests and other far long areas and convinces them the importance and relevance of GURU, GANGA, GEETA AND GAU (COW) so that they can motivate their fellow men and women to follow the righteous path. Thakurji also visits jail and spires the prisoners two lead crime-free lives. Also during natural camalities and disasters viz earthquakes, floods etc.

Thakurji organizes special program and Bhagwat Katha to mobiles resources and rush aid and succor to such stranded people. To help disabled, Thakuji commits and sends all material and financial help to the India's biggest institution NAARAYAN SWEA SANSSTHAN, Udaipur by holding bhagwat kathas. Once thakurji - while going round Goverdhan - the pious parvat (hill) in Brij Bhoomi, saw some cows feeding on "dirt/waste/throwaways". He felt so pained and hurt that he vowed that he would work towards building a goshala for such sick, old, ailing and non-milk giving cows where they can live peace, gave abundant food, water and treatment.

His vow resulted in establishment of a huge goshala near Govardhan at Neem Gaon, Goverdhan, MATHURA in a 5 acre plot of land where happily number of cows are being looked after with all facilities and care. Shri Sanjeev Ksishna aThakur Ji has up to Jan 2016 done more than 300 Bhagwat Kathas all over the country including religious cities/places. Besides he has held Bhagwast Kathas in Switzerland, Thailand, Malaysia (uin cruz). In Vrindavan, he periodically holds, satsang (religious congregations) and performs Sadu Sewa.