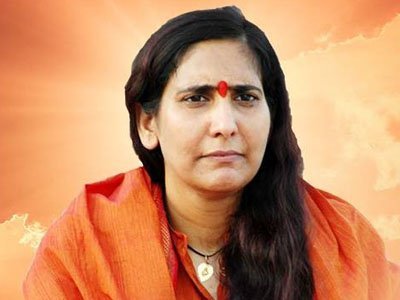 Over the years, Sadhvi Ritambharaji has emerged as one of the most prominent Indian spiritualist in the contemporary times. Though there have been many who have been charmed by the spiritual and the divine affection of the mother, it is only Sadhvi Rithambaraji who has tried to mould this affection into a village of maternal love.

IIt is very difficult either to quantify or to describe Didi Maa's reach to the masses. It is not surprising that millions of people throng to listen to her thought provoking discourses – not only in India, but also in many other countries. So enthralled are people with her reason and her philosophies that they record her discourses and speeches so that it can be relayed anytime they want.

Didi Maa reaches millions of homes everyday through the medium of popular TV channels where her bhakti sadhanas and pravachanas are telecasted everyday. She has been called a Tapa Siddha Sanyasini, a sage, whose devotion to the seeking of higher consciousness has borne fruit in this lifetime. Her Guruji, the Revered Yugpurush, asked her to devote her life to the welfare of the community and so she has done with unflinching devotion.

Under the inspiration, guidance and compassion of the great saint Pujya Acharya Mahamandaleshwar Yugpurush Swami Parmanand Giriji Maharaj, her sadgurudev, Didi Maa has dived into the depth of spiritualism to find the pearls of peace and tranquility. To realize her vision, she has renounced the worldly and material comforts. Today, she works to evoke the Indian mother’s real spirit. Sadhviji believes that every newborn is a divine creation since every soul is born to fulfill a divine mission. Deprived of parents, particularly mother, some children have to seek refuge in orphanages which never provide self respect and a sense of mother's protection which is normally available in a family, and so, the inception of Vatsalya Gram is another step in the direction of her vision.