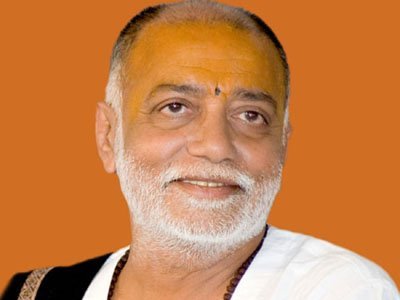 Morari Bapu is a renowned exponent of the Ram Charit Manas and has been reciting Ram Kathas for over fifty years throughout the world. The overall ethos of his Katha is universal peace and spreading the message of truth, love and compassion. While the focal point is the scripture itself, Bapu draws upon examples from other religions and invites people from all faiths to attend the discourses.

Bapu was born on the day of Shivratri in 1947 in the village of Talgajarda, close to Mahuva in Bhavnagar district of Gujarat and he still lives there with his family. He belongs to the Vaishnav Bava Sadhu Nimbarka lineage and spent much of his childhood under the care of his grandfather and guru, Tribhovandas Dada, and grandmother, Amrit Ma. While his grandmother would lovingly relay folktales to him for hours, his grandfather shared with him his knowledge of the Ram Charit Manas. By the age of twelve, Bapu had memorised the entire Ram Charit Manas and had begun reciting and singing the Ram Katha at fourteen.

The remarkable journey of reciting the Ramayana, which began in the presence of three village folk, has now taken Bapu to all corners of the world. For the over 700 Kathas held to date, Bapu has traversed every major city and pilgrimage in India and travelled to many countries from Sri Lanka, Indonesia, South Africa and Kenya to the United Kingdom, United States, Brazil, Australia, Israel and Japan, drawing millions in audiences. In 2011, Bapu held one of the most significant and historical Ram Kathas to date at the foothills of Mount Kailas, in Tibet. In addition to Ram Katha, Bapu has also orated 19 kathas on Gopi Geet, dedicating one katha for each verse, usually during the nine days of Navratri.

As well as doing Ram Kathas, Bapu has devoted much of his energy in bringing together communities, religions, sects and castes, in advocating peace and harmony both in India and globally. For two decades now, Bapu is the chief guest at the annual Yaad-e-Hussain programme held by the Muslim community in Mahuva. He also organises marriage ceremonies for Hindu and Muslim girls who are not able to pay for their wedding and participates in Kathas and other functions that are held by Dalits and Devi Pujaks.

At times of calamity in India and abroad, be it the Gujarat earthquake or Bihar floods or nuclear leak in Fukushima, Japan, Bapu has contributed generously to provide aid wherever possible. In his hometown of Talgajarda, Bapu has organised several literary and cultural programmes, honouring litterateurs, musicians, dancers, dramatists and actors among others. A conference on World Religions, Dialogue and Harmony, was held in 2009, inaugurated by the honourable Dalai Lama. Religious leaders of Buddhism, Jainism, Sikhism, Islam, Christianity as well as Hinduism spoke about the fundamental principles of their orders and advocated continuous dialogue for establishing inter-faith harmony. For 16 years now, eminent writers and poets meet to discuss literary and scholastic issues and developments during the three-day Asmita Parva. The evening classical music programmes bring together renowned vocalists and instrumentalists of India. Every year for the last 14 years, scholars of Sanskrit from all over India have also been meeting to analyse and examine the literary and scriptural texts written in this most ancient language.

In 2006, a seminar was organised in Talgajarda on the regional versions of Ramayana in modern Indian languages. Experts from various regions of India from Tamil Nadu and Punjab to Gujarat and Assam convened to participate in this seminar. In July 2012, a national conference on Valmiki Ramayana was graced by Dr Satyavrata Shashtri, Dr Radhavallabh Tripathi, Dr Rajendra Nanavati and several other scholars of the Ramayana. An International Conference on the Ramayana is now being proposed in 2014.