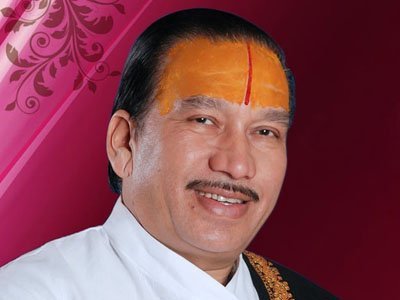 The 1st of July 1960 witnessed the birth of Shri Krishna Chandra Shastriji (Shri Thakurji) in the small village of Lakshmanpura (Mathura, U .P.) near Vrindavan. Pandit Shri Ram Sharanji Upadhyaya and Shrimati Chandravati Devi Upadhyaya are his religious parents devoted to the epic of Bhagwat and dedicated to tending the sacred cow. Shri Thakurji's grandfather, Shri Bhupdevji Upadhyaya delighted him at a young age with stories from the Ramayana and Krishna Charita. Thakurji was enthralled by these tales and listened with single minded devotion. ln his early years of education at Vrindavan, Shri Thakurji was fortunate to learn under the tutelage of the enlightened, Shri Swami Ramanujacharyaji Maharaj. Along with conventional teaching, the learned Shri Ramanujacharyaji gently introduced Thakurji to Geeta. Valmiki Ramayan, Shrimad Bhagwat and other Holy Scriptures. Soon, under his illustrious teacher, Thakurji obtained a post graduation in Grammar as well as Philosophy. Thakurji participated along with his teacher in various discourses of the Bhagwat. And at the tender age of 15, Shri Thakurji, a mere student in 1975, gave his first ever Bhagwat discourse in the city of Mumbai. Thakurji continued enthralling listeners of Bhagwat as well as enriching his mind by learning new scriptures. The knowledge of classical music played another important role in his younger days.

Shri Thakurji traveled to Shri Jiyarswami Math in Jaggannath Puri where he was initiated into the Vaishnav Sect by Swami Shri Garudadhwajacharyaji Maharaj, the leader of the Math. He was further enabled with the responsibility of granting initiation to disciples, according to the norms of the sect. His guru Shri Ramanujacharyaji and well wishers fondly conferred on him the name of 'Thakurji'. And soon, the learned and spiritual society bestowed the mellifluous and renowned Thakurji, the illustrious title of 'Bhagwat Bhaskar'.

Religious greats like Swami Shri Karpatriji Maharaj, Swami Shri Akhandanandji Saraswati, Shri Ram Chandra Dongreji Maharaj, Shri Murari Bapu and Shri Ramsukh Dasji moulded Thakurji's thinking and had a deep-rooted influence on his mind. The institution of Shri Krishna Prem Sansthan was founded under the guidance of Shri Thakurji. The teachings of Bhagwat and Vedas are offered here without any cost to students. On the auspicious occasion of Ram Navmi in the year 2003, the Sansthan has established 'Goshala'.

By the grace of Shri Krishnaji, Shri Thakurji may well be the first young Indian religious teacher who has accomplished the feat of conducting more than 961 weeks of Shrimad Bhagwat Gyan Yagya. He has received tremendous appreciation all over the country and abroad wherever he has unfolded the holy words of the Bhagwat. Thakurji's rendition of Ramayana and Geeta is equally inspiring.