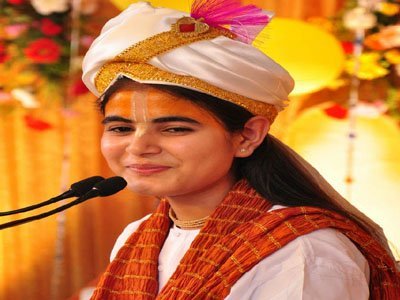 India, the land of holy people and great soul, remained the birth place of many ascetics since a long time before. Whenever the loss of righteous, justice and religion increases on this earth then God sends his holy soul to annihilate injustice and immorality and to enlighten people, society and this world regarding the God and His teachings. So that other people may lead a life. Here Devi ji is the perfect epitome of above said words. At a age when a child remain dependent on its parents barely for speaking, at such age Devi ji has successfully preached so many "Bhagwat Kathas". She has got devotees across the world. Lots of devotees convey their deep reverence for Devi Ji. On 19th January 1997 Devi Chitralekha ji (an enlightened and sacred soul) was born in a Brahman family from sacred womb of Smt. Chameli Devi wife of Shri Tikaram Sharma village Khambi, District Palwal, Haryana (India). This holy village comes in the circumference of Aadi Vrindavan. Due to this fact Devi ji has got Brij's all Divine culture spontaneously. After her birth lots of renowned saints and hermits came to her house to get a glimpse of this miraculous girl. They well totally mesmerized by her supernatural symptoms and made a prediction "she would surprise the people around the world as a great "enlightened person" in the near future".

Devi ji was initiated in GAUDIYA VASHNAVISM (founded by Chitanya Mahaprabhu) when she was just 4 years old under the guidance of a Bangali saint called Shri Shri Girdhari Baba. In her family her parents and grandparents were already very religious. When she was 6 years old, she went to Barsana to attend Ramesh Baba's (an esteemed saint of Brij) preaching program with her parents. Then in the last of preaching, Ramesh Baba handed over mike to Devi ji and asked her to say something. In obeisance to his directives she had spoken there for nearly half an hour impeccably and made all the people present their spellbound. Then Ramesh Baba himself blessed Devi ji and praised her. All people were astonished by her stunning performance.

On that day everyone realized that Devi ji could also preach. Later on her guru ji (spiritual teacher) organized first preaching in Tapovan near Vrindavan (where katyani devi meditated for 6000 years incessantly to get Lord Krishna in the form of her Husband.). Everyone was scared even Devi ji's parents were also that she could not deliver 7 day's "Shri Bhagwat Katha". Her parents urged to the guru ji "we must organize 2 day preaching program instead of 7 day's Shri Bhagwat Katha". But guru ji had full faith in her divine powers. He raised his both hands and said "it is my blessing that 7 day's Shri Bhagwat Katha will remain successful because "Radha Mata" has shown me in my dream that flowers rain will fall here from heaven".

There is no member in the family who knows how to preach "Bhagwat Katha" & play music, while Devi ji is fully capable in preaching, playing harmonium (musical instrument) and sings religious as well.Regarding "Bhagwat Katha", Devi ji is not taught "Bhagwat katha" from anywhere. Whatever she has done, is doing and will do in near future, everything is inspired by divine blessing of God. Her guru ji once suggested to Devi ji's parents that they would not have to send her for any kind of education to anywhere. But Devi ji is a person of opinion that even when "Shri Krishna" also went to "Sandipni Ashram" for higher education then why should not she. That's why she goes to a public school for her education.

So far devi ji has disseminated the "Name of God" in many areas of India like Bihar, Haryana, Delhi, uttrakhand, Madhya Pradesh, Utter Pradesh, Rajasthan, Nagaland, Punjab and mostly in entire Gujarat and apart from that devi ji has delivered discourse in foreign countries like U.K. , Africa and USA (Florida, Texas, Washington D.C., Maryland, New jersey, New York, Indiana, Boston). One and only object of her life is to spread the wave of "Radha Krishan" and "Hare Krishan Mahamantra" in the entire world till the last of her life. In obedience to her guru's will, she is totally engrossed in this pious work.